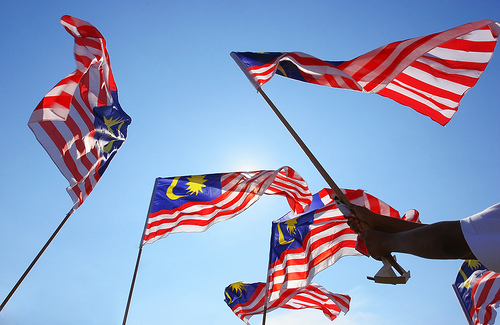 Please read the Part 1 first at https://garfield.in/?p=2098 before you read this Part 2 of the articles.

Besides the official naming of 31st August and 16th September, I would also hope that our government will announce September as “Bulan Patriotik“(Patriotism Month) start from 31st August to 30th September.

In this Patriotism Month, we should all focus of the patriotism campaigns to create social aware on several goal as listed below:

This is something that we need to fix and create the awareness about the importance of improving our country with our own hands, not waiting for other people to do it and just sitting there and wait for people to do it for them.

Unity, Muhibah
I am not talking about 1Malaysia. I am talking about Muhibah.
What is the difference? It is indeed a lot of difference.
The concept of 1Malaysia proposed by our prime minister is based on the idealism of muhibah, where it is about creating unity among the people of the country. This means all races should understand each other, respect each other, accept each other, as well as tolerance to each other in order to create peace and harmony in this country.

Well, as you know, if the people in the country are able to work together closely, it does bring benefit to our nation in terms of economy and development since everyone is working towards the same goal and in the same direction without differentiate each others race.

During the time Tun Dr. Mahathir Mohamad was still our prime minister, our whole country works very hard in trying to achieve the vision. It was very fortunate that Tun Dr. Mahathir Mohamad had become our prime minister for a very long time and there is a lot of good results from the Wawasan 2020 concept. But nowadays, after the 1Malaysia concept was introduced, how many people is still remember about Wawasan 2020? Everyone is just focusing only and 1Malaysia concept and had totally forgotten about the Wawasan 2020 plans.

We can not afford to have the unity of our nation to be lost just like a trend. Therefore, the most commonly use words like Unity and Muhibah shall be use when executing the Patriotic Month.

Please be noted that unity is closely related with patriotism due to without unity from every citizen of the country, the effort of achieving patriotism will hard to be reach, as the peoples is the main component of the nation.

Bangsa Malaysia
This is closely related to the Unity plan at above.
Currently, peoples from each races in Malaysia are not able to get along with each other because of the everyone took the difference of each other too seriously.
Since the people of this country itself is fighting among each other, how do we stay united and compete against other country in order to defense our own dignity and rights?

The Bangsa Malaysia concept was introduced long time ago, and it is sad that until today, we still unable to practicing it as part of Malaysian’s responsibility. Everyone was too focusing on how to improve the standard and superiority of their own race and neglected had totally the responsibility to form the unified nationality of our own nation.

It is sad when a teacher is asking some secondary school students, “Apakah bangsa anda?” and the students either answer “Melayu”, “Cina” or “India” and the teacher accepted the answers.
Those are actually the wrong answers, since the question is not “Apakah kaum anda?”. The correct answer should be “Malaysia”, as the question is asking “What nationality are you?”, not “What race are you?”.

In order to support what I said above is correct, see the word “Antarabangsa”. What is the meaning of this word? It means “International”, right? So the word bangsa should be referring to our nationality, not race.
If you ask an Indonesian, “Apakah bangsa anda?”, he/she will surely answer “Indonesia” or sometimes “Indon”. They do have a very strong sense of nationality in their mind without specify much on race. Unless you ask then with the word “Kaum”, then only you will get a different answer.

By realizing the dream of our previous leaders, it doesn’t mean you have to give up your own racial status, but instead, you are making sure that you race are part of the Bangsa Malaysia. Bangsa Malaysia is formed up by multiple races in this country as well as multiple cultures. Of course, this inclusive of accepting each races and their religions as part of the nation cultures.

Understanding Of The Rukun Negara
This should also be one of the important campaign for the Patriotic Month.
It is very important for the citizen to remember and understand the Rukun Negara. I am lazy to talk about this part all over again as I had published an article about Rukun Negara at the Merdeka Day.

Please read the article “Selamat Hari Merdeka? Do you really mean it when you speak it?” I published at https://garfield.in/?p=1993
Everything I wanted to say about the reason why the citizen must understand about the Rukun Negara is in that article.

The BAR council had made an effort to let the people know more about the constitution via the MyConstitution Campaign. You can visit their website at http://www.perlembagaanku.com

Understanding what is written inside the Federal Constitution is very important, as it is documented on how our country’s administration shall be formed as well as stated the rights of the citizens.
Our parliament today is formed according to what is stated in the constitution. The Kings, the ministers, the MPs, the senators, the citizens etc. rights is clearly stated in the constitution.

This is why, understanding the constitution is very very important. You can know the limit of your rights via the constitution. Hence, the effort of building the country to become a better place will be easier to achieve. You will be able to know what kind of thing you can voice out publicly, and you can know what kind of thing you have to let the MPs to voice it out for you in the parliament.

As stated in the constitution, the law and the constitution can be amend via certain procedures. This is how the parliament(Both Dewan Negara and Dewan Rakyat) able to make this country a better place for the citizen.

Beside amending the law and the constitution itself, the constitution also stated on how the procedures on approving the country’s money to spend on certain plans inside the parliament, such as the country’s annual budget or any mega projects. It also stated about how our money should be safeguard by those who hold the responsibility, as well as the people’s rights on knowing how exactly the money is spent.

I am not trying to mention anything about the politic here. But knowing more about the constitution, does help in making sure those who hold the responsibility to execute the plan of developing our country in the proper way.

Conclusion:
Promoting these 5 campaigns in the Patriotic Month can help in building this country become a better place for the citizen, in terms of unity, peace and harmony.

Remember, the country is build by its people, therefore when the peoples able to accept each other and willing to work with each other, it will be easier to bring our country to the next level of development and make our country a stronger nation.